An article about The Mice and Scar Comics

The Mice began life when I was spending Summers working in a canning factory in Lincolnshire, while studying illustration at college in 1998. At the time a dead mouse had been found in a can of baked beans so I started thinking about an environment where humans were in a similar position, i.e. vermin in a factory. After this, the job became much more interesting as I imagined tiny people running around, hopping in and out of drains and machinery. Giant aliens provided the context and I wrote and drew an unpublished joke story called The Mice in which two humans venture into a hostile alien factory to ‘bury’ one of their dead in a can; this would then be sealed up, labelled and shipped into space, kind of a Viking boat funeral with a twist.

I realised that the material was much more personal than I had originally thought, with experience of a particular relationship (and working in a factory) feeding easily into the narrative. The aliens became more nuanced until nowadays The Mice tells the humans’ life-and-death story alongside the aliens’ one of intrigue, backstabbing and hustling.

Catfood, a 40-page mini-comic, was produced and sold on the small press circuit, followed by a longer story which expanded the narrative to include a startling discovery in the wild fields surrounding the factory: a partially buried Lincoln Cathedral. A prequel was required so I re-drew the first story (a human still winds up in a can of soup although for different reasons, plus he goes in alive.) This story and Catfood make up the first graphic novel, called The Factory Menace and published by Scar Comics in 2011.

The current release – Culture Shock – sees the humans discover a dangerous way of striking at the aliens that gives them a chance of winning, while the aliens find out that humans taste great and a lucrative – if highly controversial – new industry could be theirs for the taking. 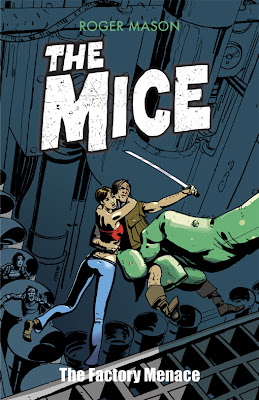 Shane Chebsey of Scar Comics:
The first time I saw Roger’s work I knew that one day I wanted to publish it. I’ve always been a huge fan of his drawing style and his storytelling. I was so proud when The Mice: The Factory Menace arrived from the printers and it was great launching Culture Shock this year to some really positive critical acclaim.

It’s a real pleasure working with a creator like Roger: he’s extremely professional and his work just stands out from the crowd. He’s one of those rare talents that can create stunning black and white comics – a skill and discipline that is slowly disappearing from comics today, but something we treasure at Scar Comics.

For those of you unfamiliar with publishers Scar Comics, what planet have you been on? Scar is a British independent publisher who specialise in unique graphic novels which stand out from the crowd. Award-winning titles like Madam Samurai and Falling Sky have introduced writers and artists like Ben Dickson and Dave Hitchcock to a wider readership and The Mice is a great fit into the Scar Comics line up.